Think you could be a Drillers Offsider?

Think you could be a Drillers Offsider? < >

Have you ever considered the variety of roles on offer in the mining industry?

From greenfields exploration roles, through to rehabilitating old mine sites, the skills, qualifications and experience needed for each of the stages is as diverse as the locations this industry operates in.

Over the coming months, we will start to profile some of the positions that you may or may not have considered as potential employment options.

Greenfields Exploration (Called Greenfields, because it is undeveloped ground.)

The type of and number of people required for a greenfields exploration project depends on the size and location of the project, the length of the program and of course, the budget. Some of the roles required could include; Drillers Offsider, Field Assistants, Drillers and Geologists and in some instances someone to cook and clean.

For a Drillers Offsider or a Field Assistant, there are generally minimal experience and qualification requirements and at times they can be offered to entry level people. A good place to start looking at requirements could be your local TAFE, as some offer Certificate III in Mining Exploration. As a minimum, applicants will require a clean HR Drivers Licence, be able to obtain a National Police Clearance, pass a full medical (including a drug screen), able to work in physically demanding environments for 12 hours a day and a willingness to work away for extended periods of time.

As Drillers offsider you will work at the direction of the Driller and will be changing drill rods, which are heavy, long and difficult to manoeuvre. Add in changing hoses, fuelling vehicles, assisting with basic maintenance and anything else that is needed to ensure the drill achieves the required metres for that shift. After a period of time as the drillers offsider, it may be possible to begin training as a driller.

As a Field Assistant, you work under the direction of the Geologist most of the time, although if you are sampling on the rig, you will be working under the direction of the Driller. Your duties will include sampling, (hot, noisy and dusty); monitoring movement of the rig to the next hole location,  numbering, counting and delivering samples, paperwork and assisting the Geologist as required.

The remaining roles are not ‘entry level’ opportunities, and require experience and or university qualifications.

Next fortnight we will talk about roles in an open pit. 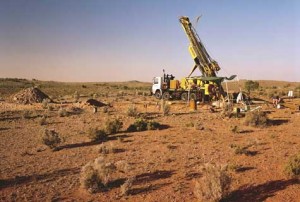 Commodities and their uses & value to Australia.

Some 88% of crude oil is used and processed as fuel; the other 12% is converted into an assortment of other materials, but mainly plastics.

Copper is naturally antibacterial so when you see it used as door knobs, handrails, etc in other public places, now your risk of bacterial transfer has naturally been reduced.

Australia shipped $US191.2Billion worth of goods around the globe in 2015, with oil, ores, gems and precious metals accounting for $US109.8 Billion of this. Forecasts are predicting that between 2015 and 2035, mankind will use more energy in these years than in ALL previous human history. This energy will come from oil, coal, gas, nuclear and renewable’s (includes hydro, solar, wind)  So while the resource price boom has passed its peak, the demand for resources to generate energy, build power stations, wind turbines, solar panels etc will continue to increase over the coming years, and ensures a healthy future ahead for the mining industry.

Today the average mining camp in Australia consists of rows of transportable buildings centred on a common wet and dry mess (tavern and dining room), a gymnasium, swimming pool, courts for basketball and tennis. Other facilities that can be included are walking trails, cycling paths, golf driving ranges, squash courts, internet rooms, and theatre rooms. But given most people work 12=hrs a day, not everyone has the time to get the best use of these facilities.

Some camps are landscaped and have full time gardeners and are laid out in such a way that there are grassed and garden open spaces between rooms; others are like the one below. Rooms either come with ensuites, shared bathrooms or communal facilities and in most instances when you are on R&R someone else uses the room. Of course the plus of site work for some, can be no need to cook and someone else cleans your room. 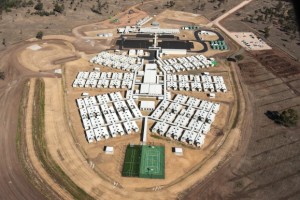 How I got my start.

I left school at 17 and started University in a non mining related course. After a year, I realised it was not for me so I decided to travel. After another year of general nothing jobs, living in shared accommodation around WA, and at times ‘borrowing’ from parents, I found myself in Kalgoorlie living with relatives. After a few false starts in different roles, I bumped into an old school friend who was in the final year of a Geology Degree at the School of Mines…Gee, here was someone I went to high school with almost with a degree, and I barely was earning a payslip. We got chatting and I realised the opportunities a mining career could provide.  I certainly did not have the funds to live and study in Kalgoorlie, but I thought if I enrolled, I could get a full time job and work and study… My 3 year course ended up taking 5 years, as I found during the second and third year I could not commit to full time work and study, so I went to part time study. I am still working in the industry and looking back, if not for that chance encounter and a bit of a butt kick from my folks, who knows where I would be. It is hard work, but if you want something enough, my advice, don’t let anything stop you from achieving your dream.